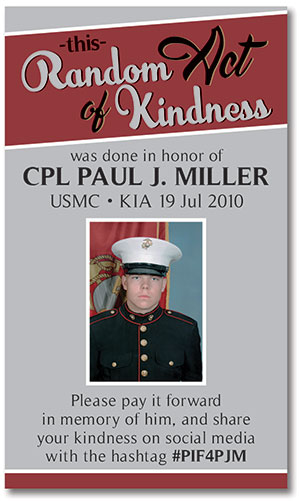 My Gold Star Story: When the Unthinkable Happens To You
By Sarah Beth Miller Morgan, Gold Star Spouse

In 2010 the unthinkable happened. 2 men in uniform came to my work at 6:30 in the morning to tell me my husband had been killed in Afghanistan.

I had never met the men before, and they spoke very monotone. They didn’t want to be there anymore than I wanted them there. Their delivery of the news was cold, and that moment will forever be engrained within my soul.

The next couple weeks were a blur. They immediately flew me to Dover Air Force Base to wait for his remains to return to the US. After that, we went to Michigan, where we were both from. There’s a lot that goes into a military funeral, so it usually takes a couple weeks for the services to take place. The sound of TAPS and a 21 gun salute still send chills up my spine.

I was 22 years old and had only been married for 2.5 years. I wasn’t ready for any of this, and the military was no help at all.

I was assigned a CACO, a Casualty Assistance Calls Officer. He’s supposed to be there to help me with anything I need and to answer any questions I might have.

My CACO was less than helpful, though. He hated being a CACO…and I can’t blame him. It would be a terrible job, but I needed someone…anyone. He would always text me in all caps, which made me feel like he was yelling at me. Luckily for me, when I told him I was moving to North Carolina, he reassigned me to a CACO out here. Unfortunately, that one wasn’t any better. To make a long story short, I ended up with a third CACO, whom I wouldn’t even know how to get a hold of today if I needed to.

All I knew is I needed a change.

There were a lot of people, though, that didn’t accept my move, like Paul’s parents. They stopped talking to me when I moved because they couldn’t understand how I could just pack up the life I had with Paul, move across the country, and start over. I also received a ton of ridicule from people for buying a house…for moving…for moving  on.

The worst of it was when I started dating again.

And I was right.

I received messages from people telling me how I was disrespecting my husband…that I’m a piece of shit…you name it. And then when we decided to get married, I lost more friends. My very best friend in the entire world stopped talking to me the night I told her I got engaged. The  same friend who sat with me days after Paul’s death and told me that it was OK to move on someday; my wedding vows said “til death do us part” and I had fulfilled that promise.

Because of the comments people made to me, and about me, I developed social anxiety. The girl that was voted “most individual” in high school, suddenly worried all the time about what other people thought about her. I felt closed off from the world. I had a really hard time making friends. I hated meeting new people because I didn’t want to have to tell them about my past. Not that I minded talking about it, but I worried that when they found out, they would either judge me for the decisions I made, or they’d see me differently…they’d see me like a victim and wouldn’t treat me the same.

Over the years, both happened. During one of my current husband’s deployments, I was going through a period of deep depression. I tried to confide in a close friend, and instead of giving me the support that I needed, she said, “Why don’t you just stop talking about killing yourself and just go do it.”

During that same deployment, my best friend at the time told me she couldn’t be friends with me anymore because she felt like she could never come to me with her problems because what I had been through would always be worse .

When you’re deep in the midst of your grief, and people say things like that to you, it’s harder to just brush it off. Those words have stuck with me for years. So now when I really want to make new friends, I have this devil on my shoulder telling me I’m not worthy of friendship because I have too much baggage.

Since my husband’s death, I have questioned my self worth. And I did that because of all the things people have said to me over the years.  Most people don’t know this about me. Most people who know me today, didn’t know me prior to Paul’s death, so they don’t see the differences between old Sarah and new Sarah like I do. They don’t know that this isn’t me. The way I feel isn’t Sarah.

I am a fun, bubbly, outgoing person, but I have been paralyzed by the way people have treated me, by the things people have said to me and behind my back; but, it’s also made me stronger. The way I look at it, there are very few things in the world that could happen to me that would hurt more, or be harder than, Paul’s death. That means I can handle anything that happens to me, because I’ve already survived the worst.  That is power.

And now that I’ve discovered my power, I’d like to share it in the form of knowledge with you. Everyone grieves differently, and that right there is probably the biggest thing I could teach you.

Some people need to be alone, some need to be surrounded by love. Don’t ever compare a death that you’ve experienced to one of a military widow.  I don’t even tell new widows that I know what they’re going through, because I don’t. No two situations are the same, nor are the people experiencing them.

I think society tries to throw every widow in the same category, and also expects them to grieve a certain way. I think that’s why so much judgment has been passed on me over the years. No one knows how I feel inside but me.

And I know what I need more than anyone else. Just because I moved on, got remarried, and had 2 kids doesn’t mean that I don’t think about Paul every single day. Just because I have a new husband doesn’t mean we don’t talk about Paul all the time. My husband once told me we would always have pictures of Paul in our house; that our kids would know who Paul was. Paul is my first born’s middle name. Me moving on was more like me moving forward. How can anyone say  anything about me continuing to  live?

The best way you can help a Gold Star Wife is to be there to help with little chores. Mow her lawn, take her kids to the park, bring her dinner – if it weren’t for people bringing me dinner I wouldn’t have eaten. Think about the role the husband played in the family and try to help out by taking care of some of his responsibilities. I have never forgotten the little things that people did for me immediately following my husband’s death.

One thing I’ve really struggled with for a while is feeling like people had forgotten about Paul. I would rarely see people post about him on Facebook, and even though I know that doesn’t mean he’s forgotten, it  felt like that. For years I’ve tried to come up with a way that I could keep his memory alive, but I wanted to do something positive because I couldn’t handle any more sadness.

There’s this quote that I’ve always really liked, “They say you die twice. Once when you stop breathing and the second, a bit later on, when someone mentions your name for the last time.” I never want the day to come when the world stops talking about Paul. I want people to feel joy for the life he lived and the sacrifice he made for us. So in 2016, I came up with the idea of, what has since been dubbed, the Paul card. They are random acts of kindness cards that say, “This random act of kindness was done in memory of Cpl Paul J. Miller, KIA 19 Jul 2010.” My plan was to carry them with me, and when I felt like the world needed a boost of joy, I would pass one out to a stranger along with some form of kindness.

I shared a picture of the card on Facebook on Memorial Day 2016, and was overwhelmed by the amount of support I received. I had over 60 people message me that day asking if  they could get cards to pass out too. Some of these people I didn’t even know. These people didn’t know me, they didn’t know Paul, but they wanted to be a part of this. That floored me.

After years of feeling like I had no support, suddenly I had support all over the country, and as of today, I’ve passed out over 5000 of these cards. I’ve now had a while to really let it sink in. The willingness the public had to participate showed me that it’s only a small population of people who carry that hatred that I’ve been plagued with for years. Why am I letting those few people change me?

The same night I’m sitting on my couch amazed at this revelation, I come across this quote by Scott Stable: “Let them judge you. Let them misunderstand you. Let them gossip about you. Their opinions aren’t your problem. You stay kind, committed to love, and free in your authenticity. No matter what they do or say, don’t you dare doubt your worth or the beauty of your truth. Just keep on shinning like you do.”

Sharing my story is my first step in doing just that.