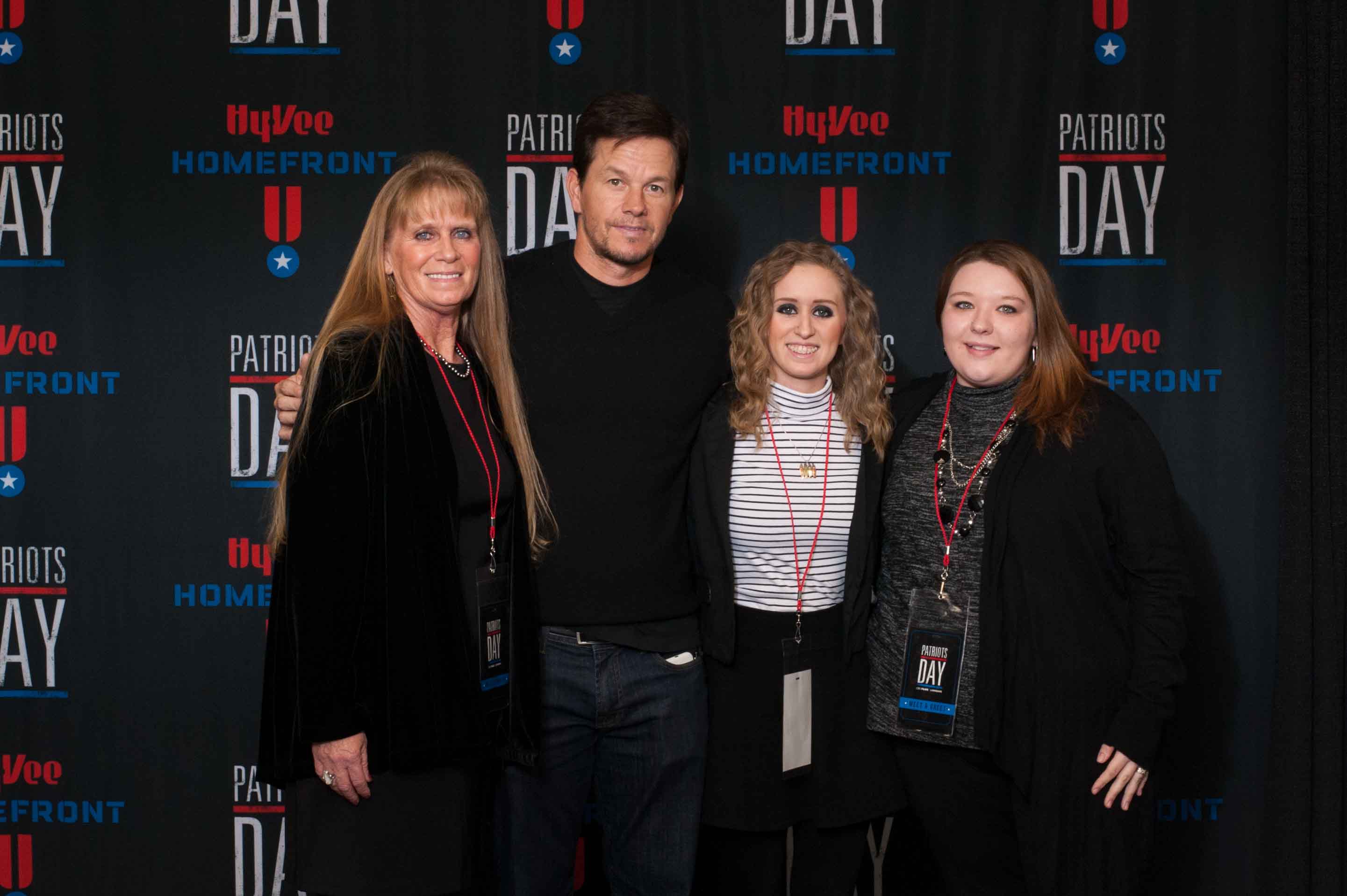 WEST DES MOINES, Iowa (Jan. 11, 2017) — On Monday, Hy-Vee, Inc. rolled out the red carpet to honor first responders, veterans and military members for a private screening of the new film, “Patriots Day.” Hy-Vee partnered with actor and producer Mark Wahlberg to show the movie to local heroes as part of a fundraiser for the company’s Hy-Vee Homefront initiative.

The movie, which is drawn from real-life accounts of the Boston Marathon bombing and details the response of first responders, the law enforcement investigative team and government officials involved with the tragedy, drew more than 800 attendees to the supermarket chain’s Ron Pearson Center in West Des Moines, Iowa.

Prior to the start of the movie, Wahlberg met privately with the families of two fallen Iowa police officers, Des Moines Police Sgt. Tony Beminio and Urbandale Police Officer Justin Martin. Both were ambushed and killed in the line of duty on Nov. 2.

“I had a unique opportunity to come to Des Moines to launch my nutrition products with Hy-Vee but we also lost two police officers here,” Wahlberg said. “This movie is a tribute to law enforcement and anyone dedicated to serving their community and country so we thought it was a great way to pay our respects and honor law enforcement here.”

Following the movie, Wahlberg provided comments about the making of the film and his life growing up in Boston.

“The film’s message of love continuing to be victorious and people coming together and inspiring people to stand up for what is right, that’s very important and it needs to be seen and heard by everybody,” Wahlberg said.

All of the funds raised from the Jan. 9 event will benefit four organizations that honor heroes, including those that serve our nation’s military members, veterans and their families and those that honor our nation’s first responders. These include the American Red Cross, Hope for the Warriors, Operation First Response and the Puppy Jake Foundation. The American Red Cross shelters, feeds and provides emotional support to victims of disasters and supports military members and their families. Hope for the Warriors is dedicated to enhancing the quality of life for post-9/11 service members, their families and the families of the fallen who have sustained physical and psychological wounds in the line of duty. Operation First Response helps meet the immediate personal and financial needs of wounded military members and their families. And, the Puppy Jake Foundation raises, trains and provides service dogs to veterans.

When discussing Wahlberg’s presence to raise money for the Hy-Vee Homefront initiative, Hy-Vee Chairman, CEO and President Randy Edeker stated, “It was Mark’s idea and his decision to come here and hold the event. We think it was a great way to bring us together and do some good.”

Created in 2013, the initiative recognizes and assists heroes and their families through several company efforts, which include serving more than 90,000 complimentary breakfasts to veterans and military members at Hy-Vee stores on Veterans Day, organizing and funding Honor Flights for veterans to Washington, D.C., and veteran and military member employee recruitment.

In addition, Hy-Vee encourages its customers to help raise funds for Hy-Vee Homefront through the Round Up for the Homefront program every November. Customers at all 242 Hy-Vee stores across eight Midwestern states are encouraged to round up their purchases to the next dollar — or a desired dollar amount — at the checkout to help programs that assist veterans. In 2016, the effort raised $286,993, which includes Hy-Vee’s $100,000 match. Since the program started, more than $1.1 million has been raised.

Hy-Vee’s relationship with Wahlberg began several months ago when Hy-Vee became the exclusive grocer to carry his new sports nutrition line, Performance Inspired. The product line launches in March at Hy-Vee stores across the company’s eight-state region. Prior to the Jan. 9 movie screening, Wahlberg toured a Hy-Vee store in Waukee, Iowa, to meet with customers and preview his product line.

“With Hy-Vee’s focus on health and wellness, it was a natural fit for them to be the exclusive grocer in the Midwest to carry my new sports nutrition products,” Wahlberg said. “And it doesn’t stop there. More great things are on the horizon with our partnership.”

For more information about the Hy-Vee Homefront initiative, the organizations benefited and how to get involved, visit www.hy-vee.com/homefront.