Wrestling for “Warriors” in need at Mainland 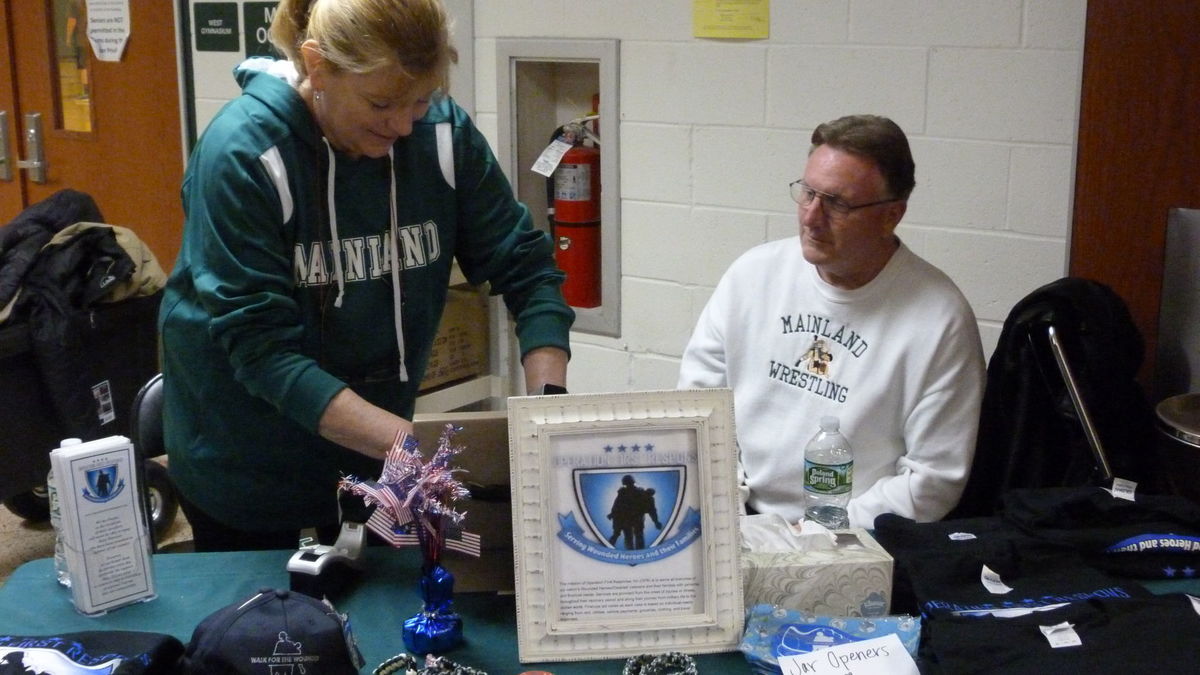 This year, the event was held for the first time on a Saturday, as Mainland hosted a quad meet against Lower Cape May Regional, Moorestown, and Cherry Hill West. Jo Carney, the project coordinator for Mainland’s “Support Our Troops” club, said the event drew such a big response that it might be held on Saturdays going forward.

“We’ve sold more T-shirts and hats for (Operation First Response) than we ever have before,” said Carney, referring to the organization that helps wounded and disabled veterans and their families with personal and financial needs.

“It’s always a good event,” Carney said. “The community is always incredibly supportive of everything we do, so we’ve been really lucky. The Veterans Administration came and set up a table, so many veterans that are here can get set up with health care and services. We’re thinking about trying to expand it a little more next year.”

Carney said America’s Best Eyeglasses and Contacts of Somers Point donated a large basket of solutions, glasses cases, and other items to the cause. Most of the donated items will be distributed to homeless veterans by Catholic Charities in Ventnor, while the money collected from the sale of T-shirts and hats will go back to Operation First Response.

Carney said “Wrestling for Warriors” began in 2008 when Mainland “adopted” the Army platoon of her son, Patrick, on his first of two deployments to Iraq. Patrick, a Mainland graduate, was wounded in Iraq and now works as a Veteran Community Outreach Specialist for the Veterans Administration.

“It’s always good when the community comes together to help support veterans of any shape or size,” Patrick Carney said. “It always holds a special place in my heart, when the community comes together and says, ‘You know what, we’re going to help these guys. They need the help, and we’re going to do the best we can to make sure they know they’re cared about, and that we appreciate what they’ve done for us.'”For more information about services offered by the U.S. Department of Veterans Affairs, go to https://www.wilmington.va.gov/ or call Patrick Carney at 302-3358-9736.The Mainland wrestling team lost all three of its matches in the quad meet. Mainland’s Jesse Bishop (138), Jonathan Rich (145) and Walter Dale (182) won with pins against Lower Cape May. Dale also had a pin and a sudden victory against Moorestown and Cherry Hill West to complete a 3-0 day.