Walk For Wounded Bonds Veterans, Inspires Others in Ocean City 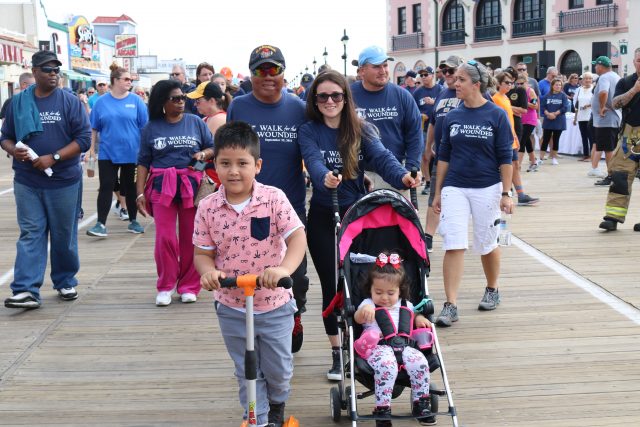 Retired Marine Cpl. Ronny Porta with his wife, Deicy, and their children, Kenneth Charles and Arabelle, join in the Walk for the Wounded.

Retired Marine Cpl. Ronny Porta suffered burns on 80 percent of his body, lost his right arm and was disfigured on May 5, 2007, when his Humvee was struck by an explosive device in Asad, Iraq.

The scars that you can’t see are his brain injuries, including memory loss and Post Traumatic Stress Disorder (PTSD).

“Right now, I am working,” Porta said. “I continue my therapy and just try to take it day by day.”

Porta and many other veterans injured while serving their country joined with their families, friends and supporters for the 10th annual Walk for the Wounded on Saturday in Ocean City.

A ceremony in front of the Music Pier honoring the soldiers kicked off the event before participants made their way on the Boardwalk from Sixth Street to 14th Street while walking in unison.

Money raised from the Walk for the Wounded goes to support Operation First Response, an organization that helped Porta and 18,000 other military families with both financial and emotional support to wounded soldiers and their loved ones.

OceanFirst Bank is the principal sponsor of the event. To date, Operation First Response has raised more than $600,000. Steve Brady, of OceanFirst Bank, served as emcee of the ceremony.

The event was inspirational. Injured veterans brought tears to the eyes of people in the crowd as they spoke about the bonds they have developed, their journey and how Operation First Response has helped them.

“Without these guys, I’m pretty sure I’d have had a harder time,” Porta noted. “They really helped me. They made sure my mom and dad could be with me. They helped with the expenses.”

Porta was joined by his wife, Deicy Porta, and their young daughter, Arabelle, and son, Kenneth Charles, 6. Kenneth Charles is named after two soldiers Porta was friends with who died the same day he was almost killed.

Deicy Porta, his wife of seven years, said she was a nurse, but they didn’t meet in a hospital.

“I help him with everything,” she said. “When I met him, it was after the accident. I knew I could handle it.”

Nick Constantino, of Operation First Response, commented about what the organization is all about.

“Ronny is a classic case of what a military vet goes through when there is a gap in the system,” Constantino said. “He needed 24/7 care. We were able to get him the care he needed around the clock. I’d like to think without us, he wouldn’t have received the care as quickly.”

During the ceremony, Army Specialist Cole Gasperini, of Somers Point, who recently returned from 18 months of service in Afghanistan, Iraq and Syria, received a hero’s welcome home.

Army Staff Sergeant Patrick Carney, of Linwood, said he was proud to be able to welcome Gasperini home.

While Gasperini received supportive words and plaques from Carney, his mother, Kellie Gasperini, of Somers Point, said she was proud of her youngest child.

Gasperini wears hearing aids because of injuries he sustained to his ears and he also suffered a hand injury and will need an operation, his mother said.

Army Chief Warrant Officer Trevor Jenni sang the National Anthem during the ceremony. Jenni experienced multiple mortar attacks and suffered injuries to his head and right foot while deployed to Kandahar, Afghanistan, from 2002 to 2003.

He told the crowd that his motivation to serve his country came from those who served in Vietnam.

Jenni, who has been friends with Marine Sergeant Wyatt Clevenger, who is an Ocean City firefighter and EMT, said his buddy helped him get the help he needed from Operation First Response.

Clevenger said he wanted to help his friend, who once was an Ocean City surfing acquaintance.

“I stopped by and talked to Trevor about Operation First Response and a couple of days later, everything turned around,” Clevenger said.

Peggy Baker, president and founder of Operation First Response, told the crowd she is grateful to all of those who have served, from the men and women who are still here today and to those who have been killed.

“I am grateful to each and every hero and to the family of the fallen. It is an honor and a privilege to know, love and learn from your strength and courage,” Baker said.