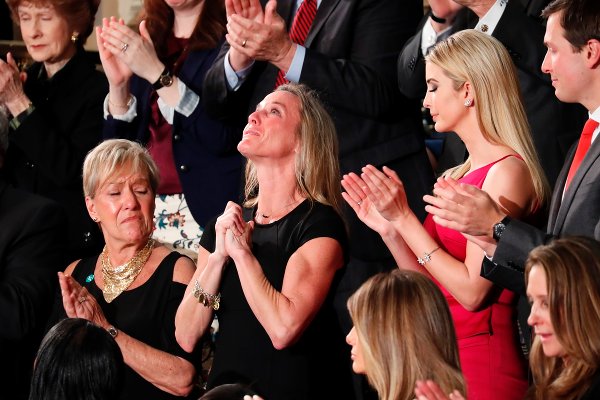 President Donald Trump last night honored the widow of slain Navy SEAL William “Ryan” Owens while defending the value of the Yemen raid in which he was killed.

In the emotional highlight of his address to a joint session of Congress, Trump directed the attention of the audience to the House gallery, where Carryn Owens was seated with First Lady Melania Trump.

“We are blessed to be joined tonight by Carryn Owens, the widow of a U.S. Navy Special Operator, Senior Chief William “Ryan” Owens. Ryan died as he lived — a warrior, and a hero — battling against terrorism and securing our nation” in the Jan. 29 raid against a compound of the Al Qaeda in the Arabian Peninsula group, Trump said.

Several news reports have questioned the timing and worth of the raid, and raised doubts on White House claims that the mission was a “success” and resulted in the gathering of valuable intelligence.

However, Trump said he had just spoken to Defense Secretary Jim Mattis “who reconfirmed that, and I quote, ‘Ryan was a part of a highly successful raid that generated large amounts of vital intelligence that will lead to many more victories in the future against our enemies.'”

Trump said that “Ryan’s legacy is etched into eternity. For as the Bible teaches us, there is no greater act of love than to lay down one’s life for one’s friends. Ryan laid down his life for his friends, for his country, and for our freedom. We will never forget him.”

Earlier, Trump had appeared to be shifting responsibility for Owens’ death in the raid he personally authorized in the first combat action of his presidency.

“They lost Ryan,” Trump said in interview with Fox News of the “generals” who made recommendations to him. In appearing to break with the presidential tradition of taking blame for battle deaths. Trump said the planning for the Yemen raid was essentially completed during the Obama administration — a claim Obama aides have denied — and he asserted that his “generals” urged the mission to go forward.

The concept for the mission “was started before I got here,” Trump said, and the raid was an operation his generals “were looking at for a long time doing.”

“This was something that was, you know, just — they wanted to do,” Trump said. “And they came to see me and they explained what they wanted to do, the generals, who are very respected. And they lost Ryan,” he said.

The leaks from the White House that Trump has railed against suggested that the Yemen raid was pushed hard by retired Army Lt. Gen. Mike Flynn, the former National Security Advisor who was forced to resign after lying to Vice President Mike Pence about his Russia contacts.

However, the bottom line was that Trump “authorized that mission and it did not go well,” retired Adm. James Stavridis, the former Supreme Commander of NATO, told MSNBC.