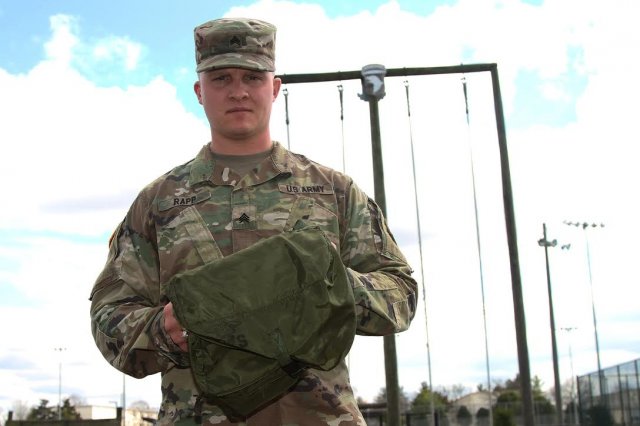 FORT CAMPBELL, Ky. — When there is a crisis, it is not uncommon for a service member to step up and take charge of that situation. That is exactly what Sgt. Chase Rapp did when he drove past the site of a car wreck while visiting his hometown of Floyds Knobs, Indiana, Jan. 28.

While driving down a road he hadn’t frequented in nearly three years, Rapp, a human resource noncommissioned officer with 716th Military Police Battalion, 101st Airborne Division (Air Assault) Sustainment Brigade, 101st Abn. Div., and his girlfriend encountered a truck that had crashed into a utility pole. Rapp slowed down to ask onlookers if everything was okay. “Well, we think so,” was the not-so-reassuring response.

Rapp pushed for more information and discovered the individual in the car was bleeding, so he immediately pulled over to provide assistance.

As he sprinted over to the truck, Rapp could see that the front end had been completely smashed in. It was difficult to see inside the vehicle because of smoke pouring from the engine into the cab. Through the smoke, Rapp could see an unconscious man lying in the driver seat, covered in blood.

Rapp tried to open the doors, but they were jammed shut. He then grabbed items from his truck to try to break the windows but nothing worked. He began to panic, he said.

That’s when the 6-foot-tall Rapp jumped into the bed of the truck and kicked in the back window. However, he quickly realized his broad shoulders would not fit through. It was time for plan C.

Rapp used a metal piece that had broken off the truck to finally bust through the rear windows and climb in.

He unlocked the doors so the other people who stopped at the crash site could open the doors and allow the smoke to flow out. He ran back to his truck to grab his personal medical bag.

Unsure if the man had already asphyxiated, Rapp began assessing the situation and realized it was no ordinary accident.

“The man’s head was facing toward me and his eyes rolled back in his head,” Rapp said. “That’s when I noticed he was cut from ear to ear on his throat and both of his wrists had been cut.”

Rapp pushed aside any assumptions these types of wounds carry and instead asked the man questions to check his responsiveness. The man had only a short response.

Rapp had no intentions of letting that happen.

He began delegating duties to those standing around to grab items from the bag.

Rapp threw on some latex gloves, just like in training, and began applying pressure to bandages covering the man’s wounds.

Around that time, the fire department arrived, but Rapp continued to provide care and assistance.

“I stayed with that patient and held pressure on his neck all the way up until the flight crew came and took over from there,” Rapp said.

With minor cuts on his arms, face, and back, and his blonde hair saturated with the smell of engine smoke, Rapp and his girlfriend continued on their original journey to his family’s farm to feed and water his horses.

Later, Rapp found out that the man had lived, but no other information could be provided from the hospital.

Saving lives: it’s what he does

Why did Rapp have a medical bag in his truck to begin with?

Nearly a year prior to this incident, in the same area, Rapp saved the life of a women who was involved in an accident on a nearby highway while he was home on leave from Germany.

In January 2015, Rapp and his father were driving on a dark country road on their way to go night fishing.

They drove past a wreck and almost hit the cars involved in the accident. Another car driving beside them wasn’t so lucky — it collided with the wrecked vehicles.

Rapp said he almost got hit by passing cars as he got out to help the crash victims. He looked down the highway, saw two semi-trucks coming, and knew he had to intervene. He took off in a sprint and risked his own life to flag them down in time to stop or slow down before plowing into the accident ahead.

After stopping the semi-trucks, he returned to the crash site and found a woman in the road who had been ejected from one of the cars involved in the accident.

With only a dull knife and a t-shirt, Rapp crafted makeshift bandages to prevent hemorrhaging from the woman’s open head wound.

Rapp called 911 and continued to provide care until the ambulance arrived.

The woman survived and Rapp decided he needed to put together his own medical bag in case he ever ran into a similar situation, not knowing that almost a year later he would.

It was more than medical equipment that helped Rapp save the man in the truck.

Prior to joining the military in April 2014, Rapp earned his certified nursing assistant certificate and worked at a local hospital in Indiana.

After joining the military, he took the Army’s 40-hour Combat Lifesaver Course, where Soldiers learn basic life-saving skills such as care under fire, tactical field care, and casualty evacuation care.

Rapp said the CLS course stuck with him even more after the first accident he responded to because he realized that things like that can happen to anyone, anywhere.

“That’s where first aid is truly important,” Rapp said. “Until that medical team arrives, you’re all that individual has.”

Lt. Col. Michael Johnston, the commander of 716th MP Bn., said “bystander mentality” is the reason not everyone would be willing to stop to help an accident the way Rapp did.

Rapp’s heroic actions are what is expected whether a Soldier is on or off duty, Johnston said.

“It didn’t surprise me when we have an NCO off duty who’s willing to go to that full measure to help save the life of someone,” he said.

Johnston said it is important for his battalion to ensure all Soldiers are CLS qualified.

CLS is an individual skill that all Soldiers must have the basic knowledge of, he said.

Though he saved the lives of two individuals on two separate occasions, Rapp remains humble and said the experience of saving a life is rewarding and instills confidence.

The experiences also instilled confidence in him as an NCO, he said.

“If someone trained me to do this, that means I can train someone else to do this,” he said.

Rapp can share his story with his Soldiers and show them they still have a duty to perform first responder actions for people because they are trained, he said.

“You never know what you can do until you’re put in that situation,” Rapp said. “Someone who just breezed through CLS … may not know until the moment comes that they actually can do something.”