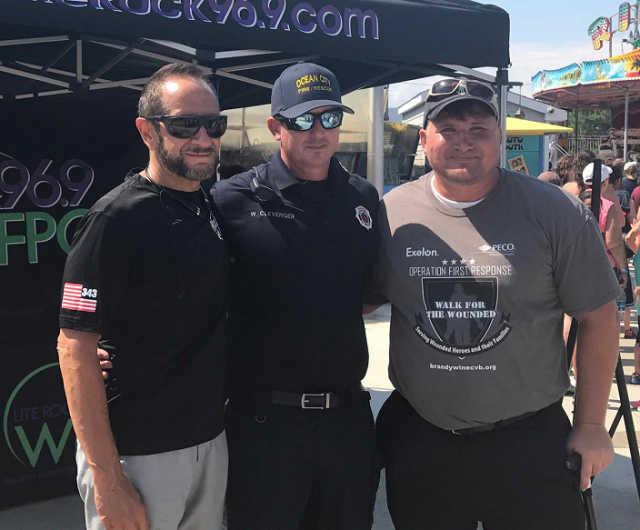 When hundreds of families visited Playland’s Castaway Cove for Family Day in early August, they were doing much more than enjoying the rides and excitement of the Ocean City Boardwalk. They were helping to raise funds for Walk for the Wounded, a fundraising event that helps Operation First Response support wounded soldiers in times of crisis.

“We were thrilled that so many people came to support Walk for the Wounded,” said Tricia Ciliberto, Walk Committee Chairperson. “The pier was packed that day with families who wanted to have a great time for a wonderful cause.”

Families will have another opportunity to enjoy Boardwalk rides while helping injured soldiers. On the day of the Walk for the Wounded, Gillian’s Wonderland Pier offers an incentive for children to raise funds for Operation First Response. Children who bring at least $10 to the Walk will receive a free ride wristband valid from1 to 5 pm on that day. Gillian’s Wonderland Pier is located at 601 Boardwalk in Ocean City.

The Ninth Annual Walk for the Wounded takes place on Saturday, September 30, at the Ocean City Music Pier. Registration begins at 8:30 am, opening ceremonies take place at 9:30 am, and the three-mile Walk begins at 10 am.

All proceeds from Walk for the Wounded will help Operation First Response, rated a four-star charity by Charity Navigator, support wounded soldiers in times of crisis. More than 97 cents of every dollar raised will be donated directly to injured soldiers who are facing financial, physical, and emotional struggles.

To learn more about Walk for the Wounded sponsorships, advertising opportunities, or registration, please contact Tricia Ciliberto at (609) 402-5190, or visit www.OperationFirstResponse.com.