K9s For Warriors – Because Together We Stand 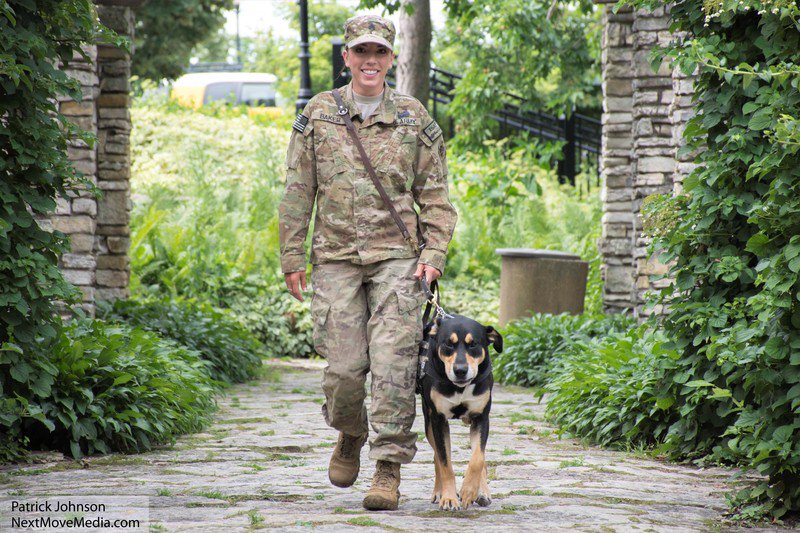 K9s For Warriors is a BBB accredited charity organization located in Ponte Vedra, Florida, that has been pairing rescues dogs with traumatized soldiers since 2011. The dogs are trained to be service dogs, specifically performing tasks to quiet the symptoms of war trauma disabilities in soldiers. Specifically, the dogs are trained to deal with symptoms of Post-traumatic Stress Disorder (PTSD), traumatic brain injury (TBI), or military sexual trauma (MST), as a result of military service on or after 9/11.

Shari Duval, the founder of K9s for Warriors, started the program after watching her son Brett Simon suffer from PTSD after he returned from Iraq. Simon did two tours, developing PTSD during the first one. Watching her son suffer from the debilitating condition motivated Duval to research alternative treatments to the standard talk therapy and medication, neither of which worked for her son. After two years of researching alternative PTSD treatments, Duval came upon a program that paired service dogs to alleviate their PTSD symptoms in veterans.

“The skillsets our dogs learn help these warriors with anxiety, isolation, depression, and nightmares,” says Duval. “So, the warriors can function again in public.” To date, the program has rescued more than 850 dogs and 440 military service members, with an astounding 99% program success rate.

PILOT STUDY AFFIRMS ANTICIPATED OUTCOME
K9s For Warriors recently partnered with Purdue University College of Veterinary Medicine on a pilot study testing the effectiveness of service dogs as a complementary treatment for military members and veterans who suffer from PTSD. Half of the program’s participants had service dogs; the other half did not.

Dr. Anantha Shekhar, Director of Indiana Clinical and Translational Sciences Institute states, “Service dogs are a great resource for veterans to modulate their own reactions and to cope better with symptoms of PTSD.”

Other key findings (in a related study) include a significant reduction in suicidal thoughts, required medication (not suggested by K9s For Warriors), night terrors, and an increase of three to four more hours of sleep per night. That is, in part, due to the fact that the service dogs are trained to wake up the warriors when experiencing night terrors. Purdue University is currently studying this behavior and although it hasn’t been substantiated scientifically, it has been reported by K9s For Warriors anecdotally.

Dr. O’Haire has been granted additional funding from NIH to perform a large-scale study on the efficacy of service dogs as a complementary treatment of PTSD symptoms in military members and veterans. The study is scheduled to be completed in 2019.

STANDING TOGETHER FOR A BETTER TOMORROW
There are good things in K9s For Warriors’ future.

Dr. O’Haire is partnering again with K9s For Warriors on a more extensive study funded by NIH. The findings will be published in 2019.

The VA is also running a Congressionally-mandated PTSD service dog study that will be completed in 2019. A total of 180 veterans have received either a service dog or an emotional support dog as part of the study. According to a VA spokesperson, after peer reviews, the VA will submit the study and results to the National Academy of Sciences for review, as required by the authorizing legislation (Section 1077 of the 2010 National Defense Authorization Act).

On the legislative side, Simon is working to secure public access identification from Service Dog Credentials, so K9s For Warriors’ service dogs will be recognized by airlines, hotels, and restaurants, bypassing the need for the warriors to provide paperwork or visit the disability office.

The future for K9s For Warriors looks promising as Duval and Simon continue to fight to save lives, both of soldiers and their canine warriors.

Because together, they stand.